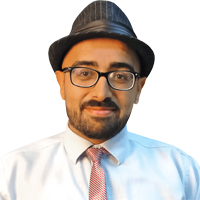 The second “season” of Bahrain’s forward-thinking public social reading space, The People, kicked off last weekend, with a literary scavenger hunt in their new location.

About 60 people of all ages took part in the treasure hunt on Marassi Beach in Muharraq last Friday and also got their first glimpse of the group’s new location.

“Our team planned a lively class with puzzles, maps and a scavenger hunt while making sure it is suitable for all ages as well as English or Arabic speakers,” said Noor Benshams, co-founder by The People, at GulfWeekly.

“About 60 people participated, including children, families and even adults with their friends.

“Since most of the clues sent them back to The People’s headquarters, the volunteers knew who was participating and could track their progress. On average, the hunt lasted 30 to 45 minutes.

“The last clue asked participants to combine all of the clues to reveal a valuable message from our team to the community: ‘One reader has a thousand adventures’. We hope our beach scavenger hunt showed them exactly that! “

Each person and group who took up the challenge received shirts from local clothing brand TGC, as well as coupons from local restaurants Burger Zone, Sharminator and Pink Parrot.

They received an overwhelming response, both in terms of community feedback and volunteer involvement. The first season included a number of events organized by the initiative’s volunteers, including sign language workshops, debates, musical evenings, author talks and poetry readings.

After their first “season,” January through March at Water Garden City in Seef, they kicked off their second season at the new location in the Diyar Al Muharraq development.

“From our first season, we learned a lot of crucial lessons about volunteer leadership, team building and decision making,” added Nejoud.

“At the start of this season, we restructured our team, gave committees decision-making autonomy, improved our budget strategy and sought advice from librarians on the best methods to organize our large collection of books.

“The biggest lesson should be the realization that our community is in fact willing and interested in giving without receiving anything in return… be it the hundreds of books donated, the professionals openly sharing their expertise, or even the dedicated hours donated. . by volunteers.

“It’s a great feeling to know that we are not alone and this season we are already seeing this generosity and this spirit!

This allowed them to showcase their entire collection – currently over 500 books – and plan different types of events for the new season.

“Of course, marketing a new location has its challenges, but after a few brainstorming sessions with the team, we have a long and exciting list of potential events planned. “

Noor and Nejoud plan to run the second season for another three months, providing the community with a picturesque beachside setting to enjoy the books and interact with the country’s burgeoning literary community.